Ethel Rosenberg and the “Red Scare”

Home > Open the Archives  > Ethel Rosenberg and the “Red Scare” 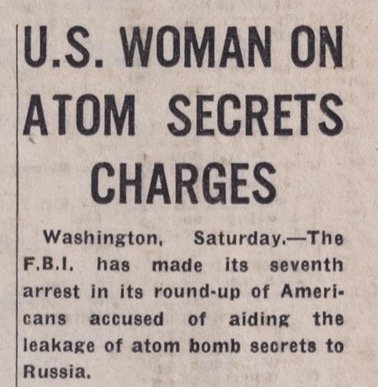 05 May Ethel Rosenberg and the “Red Scare”

Posted at 09:56h in Open the Archives by National Print Museum

“Are you now, or have you ever been, a member of the Communist Party?”

In the early 1950s when anti-Communist hysteria swept across the United States of America, thousands of Americans had to answer this question before a congressional panel.

Half of Europe was under Soviet dictator Joseph Stalin’s influence. In 1949, the world fears nuclear war as the Soviet Union detonates its first nuclear bomb, and China, the world’s most populous nation, becomes communist months later.

In the post-war years an atmosphere of fear and suspicion hung over many Americans during a period that is commonly referred to as the “Red Scare”. It seemed that every time American citizens read a newspaper there was a new communist threat, and it would appear that this sentiment also swept across the Atlantic Ocean if this edition of ‘The Evening Herald’ from Saturday, August 12, 1950 is anything to go by.

The headline reads, “Names of “Puppets” Go Down in Black Book. Secret Grand Jury Behind Iron Curtain”. But it is the small article on the upper right-hand corner detailing what would become one of the most sensational trials of the 20th century that would prove to be a far more interesting story.

Washington, Saturday, – The F.B.I has made its seventh arrests in its round-up of Americans accused of aiding the leakage of atom bomb secrets to Russia.

The Department of Justice announced the Federal Bureau of Investigation agents had arrested Mrs. Ethel Greenglass Rosenberg (34) in New York.

She is the wife of Julius Rosenberg and the sister of David Greenglass, both of whom were arrested in July on charges of obtaining highly classified atomic information for Russia.

Mrs. Rosenberg, mother of two children, was charged with conspiring with her husband and others to recruit her brother, David Greenglass, into the alleged spy ring.

Ethel Rosenberg was arrested and sensationally sentenced to death by execution for committing a crime “worse than murder,” according to trial Judge Irving R. Kaufman – being a part of a spy ring that gave the Soviet Union US nuclear information that would enable the Soviet Union to create their own nuclear bomb in 1949.

Protest marches were held around the world, including in Ireland, appealing for mercy for the Rosenbergs who were, to many, put on trial for their involvement in the Communist Party just as much as they were for their espionage tendency. In a rather gruesome execution that involved Ethel’s body being returned to the electric chair for a second time, she was executed in 1953 at Sing Sing Prison in Ossining, New York.

Ethel’s husband, Julius Rosenberg, was also arrested and executed for the same crimes, leaving two children orphaned. Ethel was the first woman in the US to be executed for something other than murder (her predecessor was executed by hanging in 1865 for her involvement in the assassination of President Abraham Lincoln).

While Julius Rosenberg was certainly involved in a spy network, the extent of involvement of Ethel’s espionage for the Soviet Union has been debated in the sixty-nine years since her death.

Evidence suggests that Ethel was held in police custody and sentenced to death in a prompt to put pressure on her husband, Julius, to give more information and names.

Ethel was also Jewish, and relatively impoverished. She wasn’t exactly a fashion icon in court to garner the attention of the cameras and captivated media. Her lack of emotion and physical tell-tale signs of duress during the trial, particularly regarding her children, demonized her to the American and international public as a woman who was more involved with communism than with her children.

In 2015, following the death of Ethel’s youngest brother, David Greenglass, it was revealed in an independent investigation that Ethel’s involvement in the spy network may have been over-exaggerated by Greenglass, in an effort to keep his own wife’s involvement a secret. By 2015, in this post #MeToo climate which put women’s positions in institutions of male power into question, a new image of Ethel Rosenberg began to form.

Was Ethel a spy for an enemy country who deserved her fate, or was she a victim of mass hysteria whose only crime was being a communist?