“Needs Must” – The Second World War and Newspaper Rationing 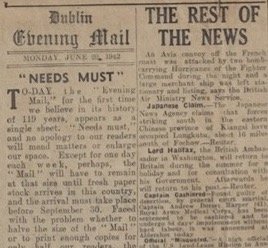 05 May “Needs Must” – The Second World War and Newspaper Rationing

Posted at 11:10h in Open the Archives by National Print Museum

This Dublin Evening Mail newspaper, dated Monday, June 29, 1942, is from the National Print Museum’s archive. For the first time in the paper’s history, the Mail appears as a single sheet.

The Dublin Evening Mail was established in 1823 and ran to 1962, making it Ireland’s longest running evening newspaper.

The article on the top left-hand corner of this edition reads:

To-day the “Evening Mail,” for the first time we believe in its history of 119 years, appears as a single sheet.  “Needs must,” and no apology to our readers will mend matters or enlarge our space. Except for one day each week, perhaps, the “Mail” will have to remain at that size until fresh paper stock arrives in this country, and the arrival must take place before September 30. Faced with the problem whether to halve the size of the “Mail” or to print enough copies for only half our readers, the Proprietors, with the loyal co-operation of the Editorial Staff, decided upon the former alternative. It is hoped by judicious compression to give a complete service of essential news and features each evening. Our readers will bear with us if, in these days of stress, we are sometimes able to give less than we would wish of information and comment.

Although the Irish Free State joined the League of Nations in 1923, it refrained from military alliances and Ireland, along with many other states (including the United States), adopted a policy of neutrality during the Second World War. Following the outbreak of the conflict in 1938, the Fianna Fáil government of Éamon de Valera, did not want to become involved in a war that would become the deadliest and most widespread conflict in human history.

However, despite the Free State’s neutrality, the country and its population still felt the knock-on effects of the war and the economic, social, and political consequences. Ireland’s geographical location and its proximity to the United Kingdom, along with its historic social, political, and cultural ties to the UK, meant that Ireland may have escaped many of the human and material losses but was unable to escape the hardships of the “Emergency”.

Despite Fianna Fáil’s attempts at creating a self-sustaining economy after it achieved independence from the UK in 1922, two decades later, when this edition of the Dublin Evening Mail went to print, Ireland was still heavily reliant on the UK for the success of its economy. This meant that the Irish Free State would feel many of the knock-on effects of the UK’s involvement in the war.

Newspapers before this period were typically made up of 16-20 pages (4-5 sheets). This single sheet edition of the Dublin Evening Mail from 1942 is an example of the everyday hardships felt by those who lived through the “Emergency”, and the effects of the conflict on the Irish economy and culture.

Ireland’s economy was severely affected by the war, as securing imports for agriculture and industry became difficult, industrial production was reduced and the nature of employment was affected. The availability of consumer goods on the market was drastically cut and these shortages led to price inflation. Rationing was introduced as a means of securing fair distribution of resources. The standard of living fell and the spreading of diseases and sicknesses increased.

However, as the headline states, in these ‘days of stress’ “Needs must”. Although newspapers are printed on poor quality paper, designed to be read one day and thrown out the next, this edition has survived eight decades and despite the lack of pages, it still has an extraordinary story to tell, if you want to sit back, relax, and read the paper (albeit for a shorter time).