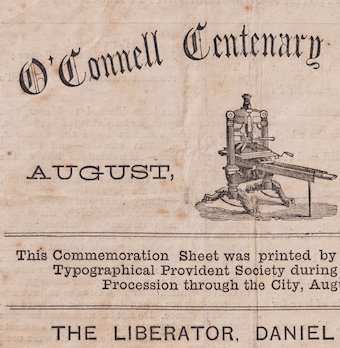 Posted at 12:55h in Open the Archives by National Print Museum

This commemoration sheet was printed by the Dublin Typographical Provident Society for the centenary celebration of Daniel O’Connell on the 6 August 1875.

Daniel O’Connell was a Catholic political agitator and is the most significant character in the history of Irish nationalism.

While O’Connell is quoted as being not fond of ‘fulsome flattery’, this celebratory pamphlet sings his praises, describing him as ‘the champion of Civil and Religious liberty, our own immortal O’Connell – the centenary of whose birth is celebrated on this ever-to-be-remembered day, with such pomp, such grandeur, such affectionate love and veneration, not alone by Irishmen and Irish-born people, but by thousands and tens and thousands from distant lands’.

O’Connell is likened to the biblical character of Moses in the pamphlet, as he too has ‘delivered his people, so far as human nature could accomplish it, from bondage’. The Irish people are free from the bondage of British Protestantism and the Penal Laws due to the grant of the Catholic Emancipation Act of 1829, one of O’Connell’s greatest achievements.

In 1801 the Act of Union meant the abolition of the Irish Parliament at College Green, Dublin, meaning Ireland would now be ruled directly from Westminster. O’Connell insisted that the British Parliament repeal the anti-Catholic Penal Laws in order to justify its claim to represent the people of Ireland.

Over the next two decades, O’Connell, using his skills as ‘the greatest orator of the day’, mobilized the Irish Catholic peasantry and middle classes to agitate for full emancipation. Although permanent political organizations of Catholics were illegal, O’Connell formed the Catholic Association in 1823 and set up a nationwide series of mass meetings to petition for Catholic emancipation.

O’Connell himself forced the issue when he entered a Parliamentary by-election in County Clare in 1828, insisting that he would not take his seat until the anti-Catholic oath required of members of Parliament was abolished.

With the events of the 1798 Rebellion and the violence of the French Revolution still fresh in people’s minds, by 1828 the British government was faced with the threat of a nationwide rebellion in Ireland if action was not taken.

With O’Connell’s triumphant election looming, the British Parliament passed the Emancipation Act of 1829, granting O’Connell the nickname ‘The Liberator’ by Irish Catholics and solidified his status as the father of the modern Irish nation.

O’Connell’s political career involved issues still present in modern Irish politics of the 20th and 21st centuries, particularly the role of violence in the struggle for Irish nationality. Throughout his career he used peaceful means to achieve greater freedoms for Catholics, with the popular quote, ‘He who commits a crime gives strength to the enemy’, being attributed to him.

While O’Connell dominated Irish politics for thirty years and achieved emancipation for Irish Roman Catholics, he never received an answer to the ‘Irish question’, as it was dubbed. His career ended in an atmosphere of bitterness and failure, as he never achieved the repeal of the Act of Union of 1800, which to O’Connell went hand-in-hand with Catholic emancipation. O’Connell was also helpless to save the population from the forthcoming tragedy of the famine, with his pleas to the House of Commons falling on deaf ears.