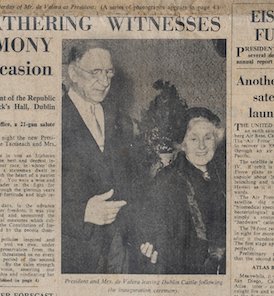 Posted at 13:02h in Open the Archives by National Print Museum

Making front-page headlines of The Irish Times on Friday, June 26, 1959, Éamon de Valera is installed as third President of the Republic of Ireland at a ‘brief and simple ceremony’ at Dublin Castle on June 25.

De Valera, or “Dev”, was the sole surviving commandant of the 1916 Easter Rising. De Valera narrowly spared execution at Kilmainham Gaol, being next in line after James Connolly. Under growing pressure from the British government to halt executions, General Maxwell, when he asked if de Valera was of any importance, was told, ‘No. He is a school teacher who was taken at Boland’s Mill’.

However, the 1916 Rising would project de Valera into the struggle for Irish freedom and was the beginning of a political career that would dominate Irish politics and solidify him as one of the most significant Irish figures of the twentieth century.

An equally appreciated and disliked man, de Valera’s legacies include: his involvement in the anti-Treaty IRA during the Civil War, his influence in the Irish Constitution, being the founder and leader of the most powerful and consistently successful political party in Irish history (Fianna Fáil), Taoiseach for over 20 years of the role’s 37 years of existence, and afterwards, President for a further 14 years.

De Valera was a man of politics and of God, and he created an Ireland in which Church and State went hand in hand. This affected the role that Irish women were to play in society. As stated in article 41.2 of the Irish Constitution that he had a heavy influence in, the Constitution ‘recognises the role of women in the home’.

De Valera was elected for a symbolic second term in 1966, the 50th year anniversary of the 1916 Rising in which he rose to prominence. He died in 1975, two years after leaving his final public office role in Áras an Uachtaráin.