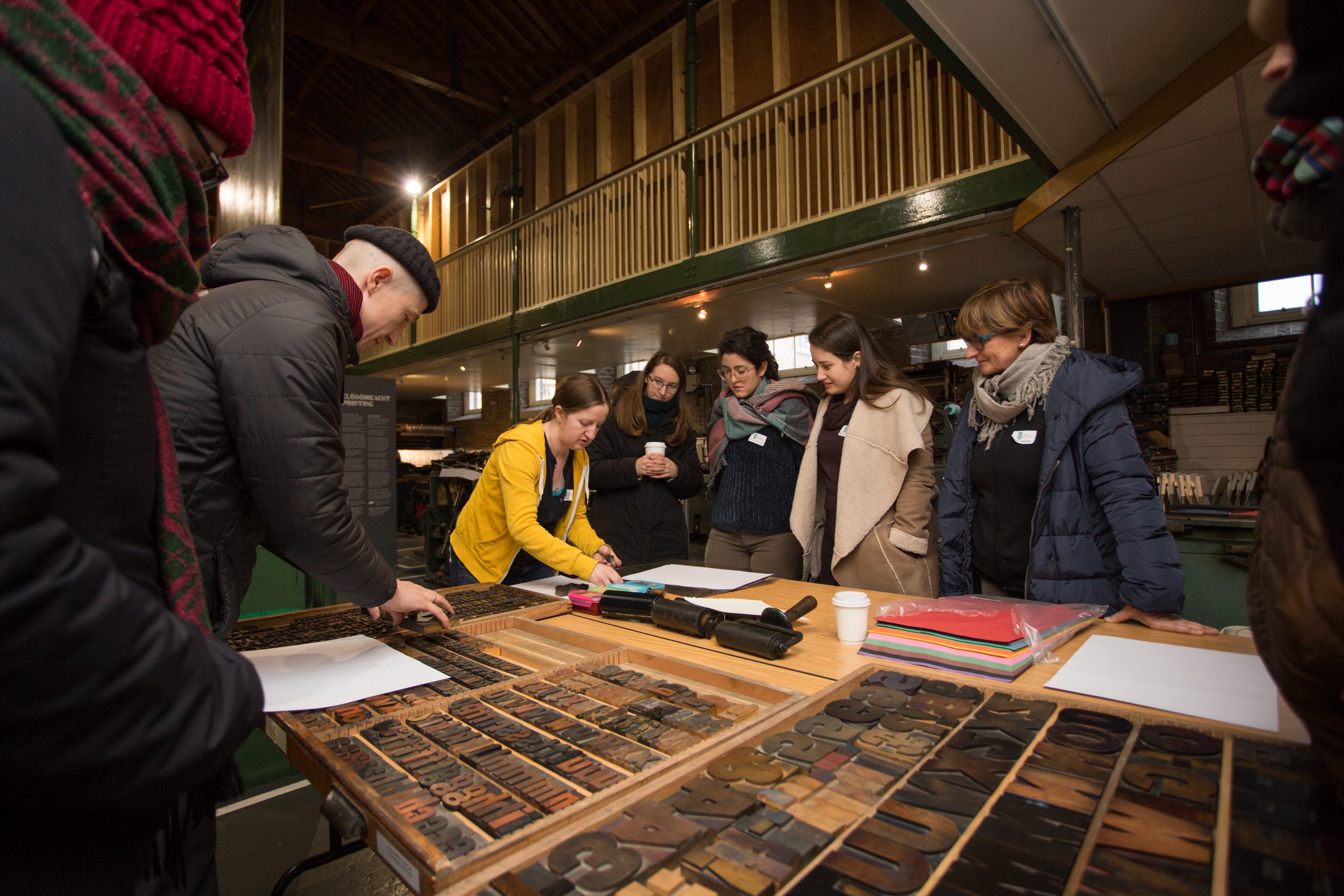 Posted at 08:22h in News from the Museum by National Print Museum

The annual Industrial Heritage Awards of Ireland were sponsored by ESB and held at its Head Office on East Wall Road on Tuesday 26 February. The four awards recipients were:

The National Print Museum was founded by members of the print industry and in 1996 it officially opened at the Office of Public Works’ Garrison Chapel in Beggars Bush Barracks, Dublin 4. The Museum is a private company and a registered charity, with principal income from the Irish government — chiefly the Department of Culture, Heritage and the Gaeltacht and the City of Dublin Education and Training Boards through the provision of the Cultural and Heritage Studies Programme. The Museum is fully accredited under The Heritage Council’s Museums Standards Programme for Ireland.

It is a unique museum — the only one of its kind in Ireland. The collection is made up largely of letterpress printing equipment. Letterpress is a form of relief printing, which was invented by Johannes Gutenberg in 1439. The invention is one of the greatest known to mankind It was the chief manner of printing which prevailed for over 500 years before becoming obsolete, in the commercial sense, in the mid-twentieth century. The main collection is not behind glass or rope, but is instead an example of a working collection which consists of fully-operational letterpress printing equipment, displayed and organised like a traditional 1960s print-shop. The panel of retired printers and compositors, who founded the Museum continue to play a vital role in preserving the collection and the craft. A major challenge is preserving their knowledge and skills, and passing these on to future generations.

The temporary exhibitions explore the impact of print and the powerful role it played in shaping our histories. Printed artefacts capture the spirit of the age in which they were created. Print forms an intrinsic part of our lives, and the development, prosperity, and rich heritage of Irish printing forms an important part of our national story of craft and industry. In recent times, there has been an international revival in letterpress as a craft form. Possible reasons for this resurgence of interest is the reality of digital fatigue and a yearning for the hand’s involvement in design and craft, and the idea of going full circle – from craft to technology and back again.

In 2017, the National Print Museum reflected on its considerable successes across the previous years. Highlights included a 300% increase in visitor numbers from 2010 to 2016, a run of popular temporary exhibitions exploring the power of print during different periods of our histories, an expanded educational programme concentrated on highest level engagement, and a significant raise in profile at national and international levels. Resources had, however, not been developing to match the progression, and focus often fell on the day-to-day, and “keeping afloat.” For this reason, the Museum moved to prioritise strategic development.

Following a series of consultative meetings, the Strategic Plan 2018-2021 was developed in January 2018. This Strategic Plan was designed to be a clear and concise document outlining the organisation’s vision, mission, values, and the strategic aims. The Plan aims to drive its stakeholders on a new strategic journey with a shared vision into the future. The Plan has undeniably brought a more unified strategic focus to the organisation, but it was a very constricted year for the Museum in financial terms. It is a credit to the team that so much was achieved on a small budget.

Some high points of 2018 included: Maintenance of Accreditation of The Heritage Council’s Museum’s Standards Programme for Ireland; the development of the major EU Project Creative Makers and the opening of PrintLab earlier this month; the commencement of a skills transfer project supported by Creative Ireland, the Aviva Stadium Community Fund and The Wild Apple Press; the inclusion of visitor videos of the key artefacts in operation supported by the Department of Culture, Heritage and The Gaeltacht; and the opportunities presented by the exhibition Print, Protest and The Polls: The Irish women’s suffrage campaign and the power of print media.

The National Print Museum is delighted to be recognized in this way. The last recipient of the Best Museum award was Titanic Belfast, so the standard is high. In her acceptance speech CEO, Carla Marrinan-Funder said “As a charity operating on a shoe-string budget, the people involved in driving the successes of the Museum must be acknowledged. I would like to say a special thanks to the dynamic and committed staff, the panel of retired printers and compositors for sharing their craft and knowledge with such devotion, and finally to the Board and Committees”.

Sunday 3 March is an ideal day to visit the award-winning National Print Museum. In celebration of Engineers Week, discover the ‘engineering’ behind letterpress printing by joining us for PrintLab (Creative Makers at the National Print Museum) drop-in taster workshops from 12.00 until 14.00 (suitable for families) and live demonstrations of the collection by the Museum’s panel of volunteer printers and compositors from 14.00 to 16.00 (suitable for all ages). Admission is free of charge.

Vision: To champion print and its impact on the world

Mission: To promote a greater understanding of the historical significance and the contemporary relevance of printing in Ireland by exploring its heritage, craft and technology

Admission is free of charge