Posted at 16:43h in General, News from the Museum by National Print Museum

To celebrate its 25th anniversary, the National Print Museum commissioned Short Stories in Print, A limited-edition collection of unpublished work by some of Ireland’s leading writers. The project will launch on 21 October 2022. 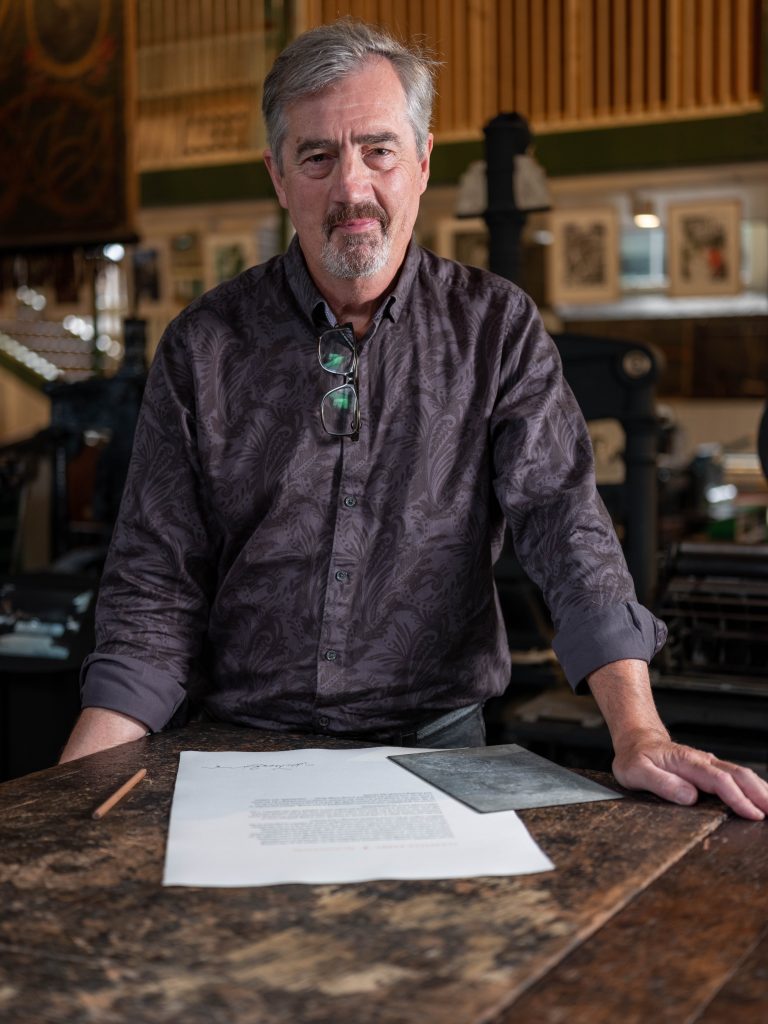 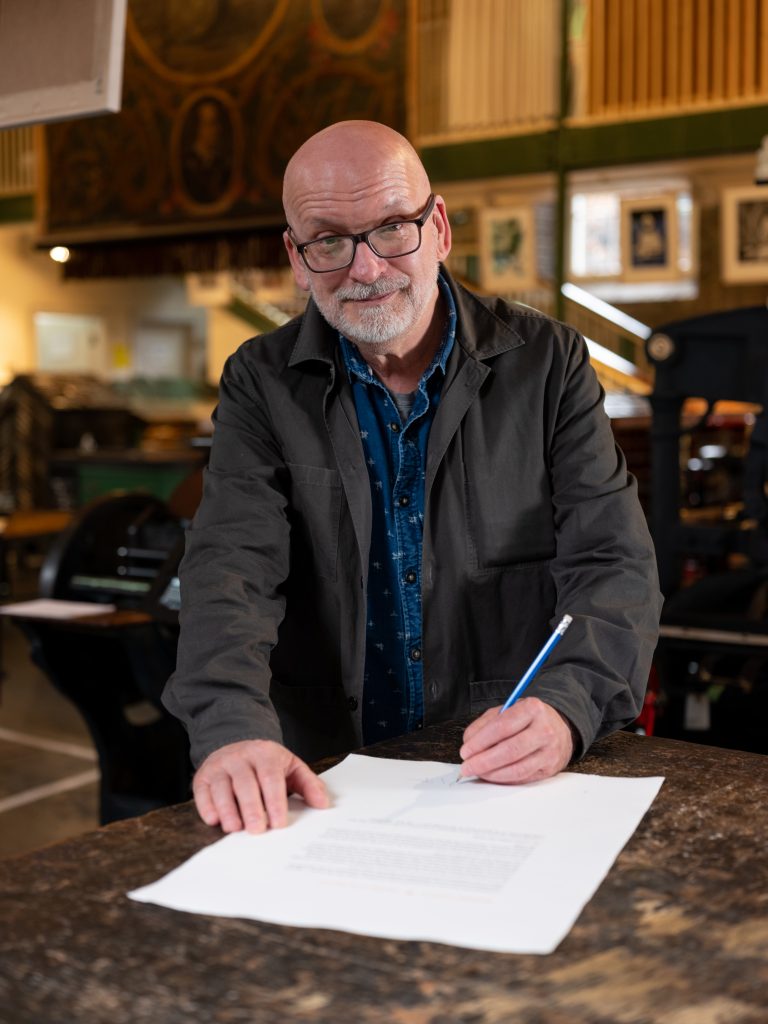 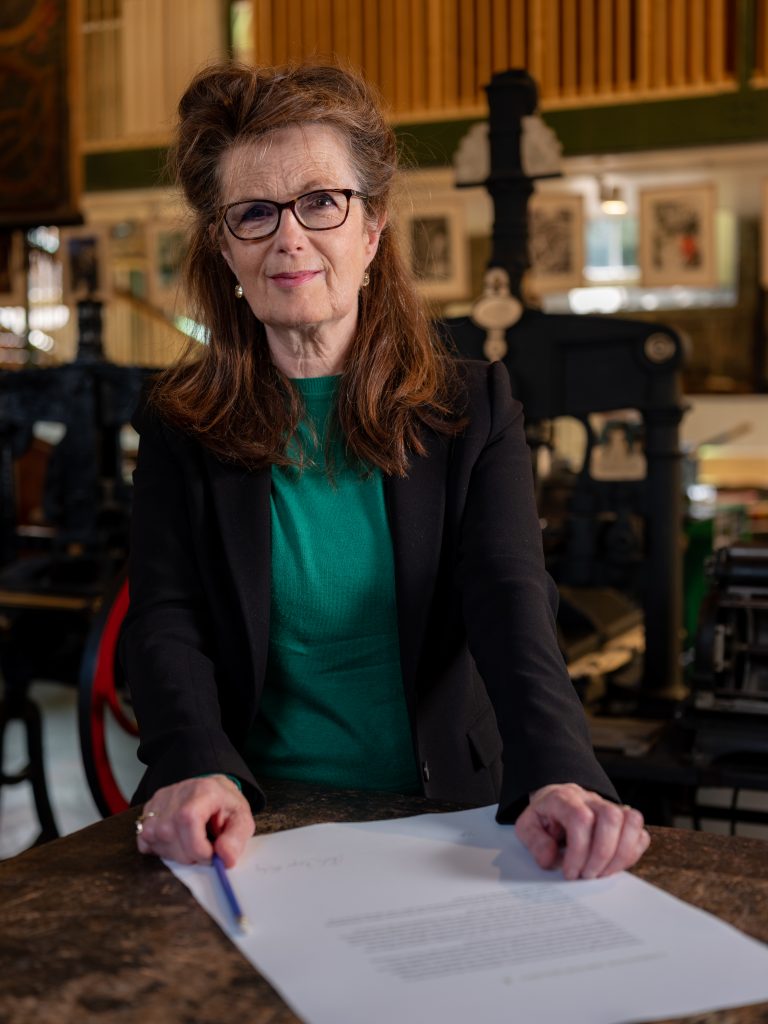 Sebastian Barry ‘The Arrested Image’
In ‘The Arrested Image’ Sebastian Barry remembers one of his artist grandfather’s old etching plates, a self-portrait of Matthew Barry’s younger self. Though now damaged and though it ‘could never be printed from’, this etching plate inspired and continues to inspire Barry who keeps it on his worktable as he uses his pen to make his way into print.

Christine Dwyer Hickey Untitled
A terrace house in London intrigues and haunts Christine Dwyer Hickey. It is both ordinary and extraordinary; it is both ‘magical’ and ‘full of menace’. Outside and inside it is oddly and chaotically decorated, carrying with it bits and pieces for years and it becomes, for Dwyer Hickey, an image of the creative mind at work, a reservoir for inspirational moments. 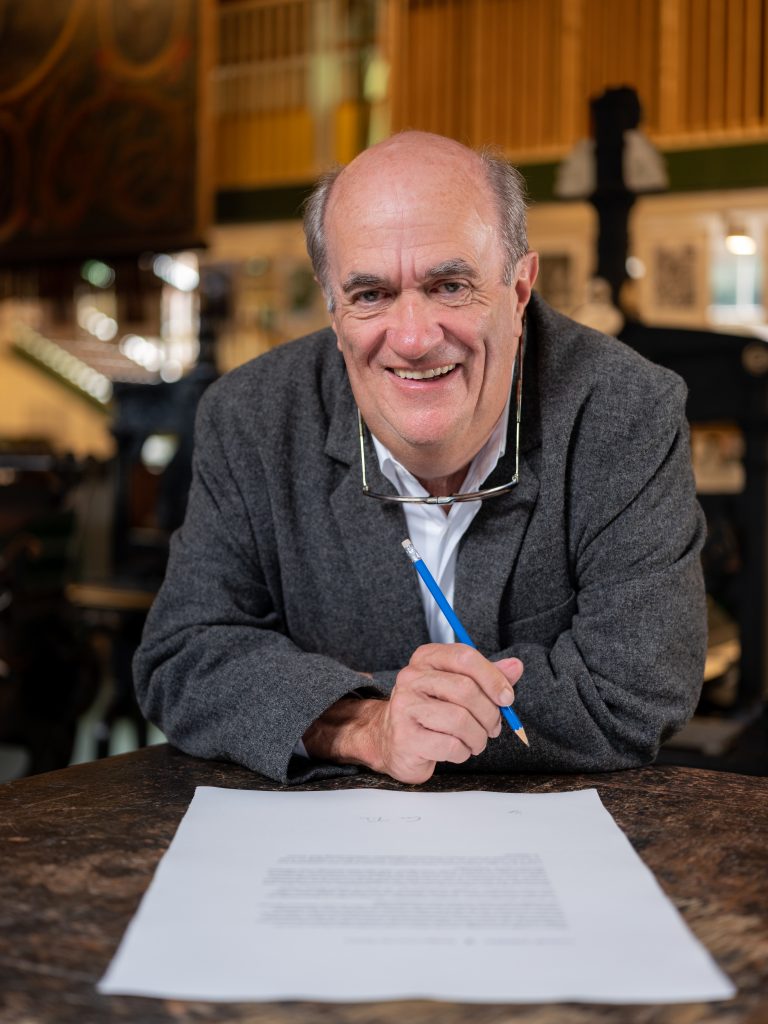 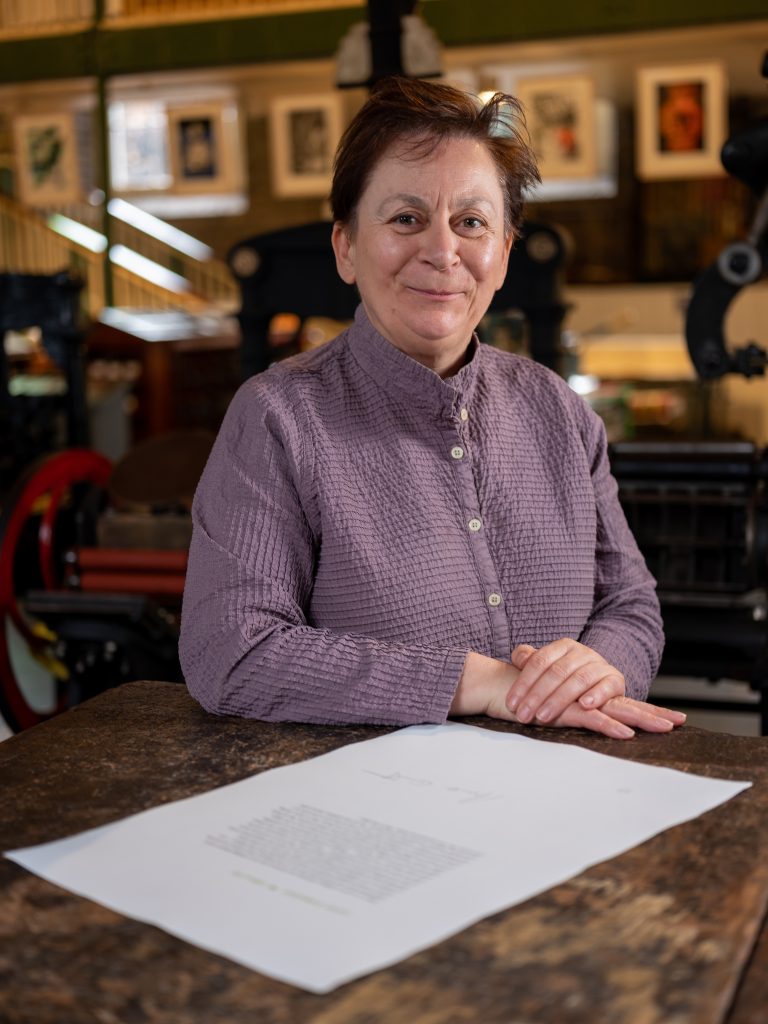 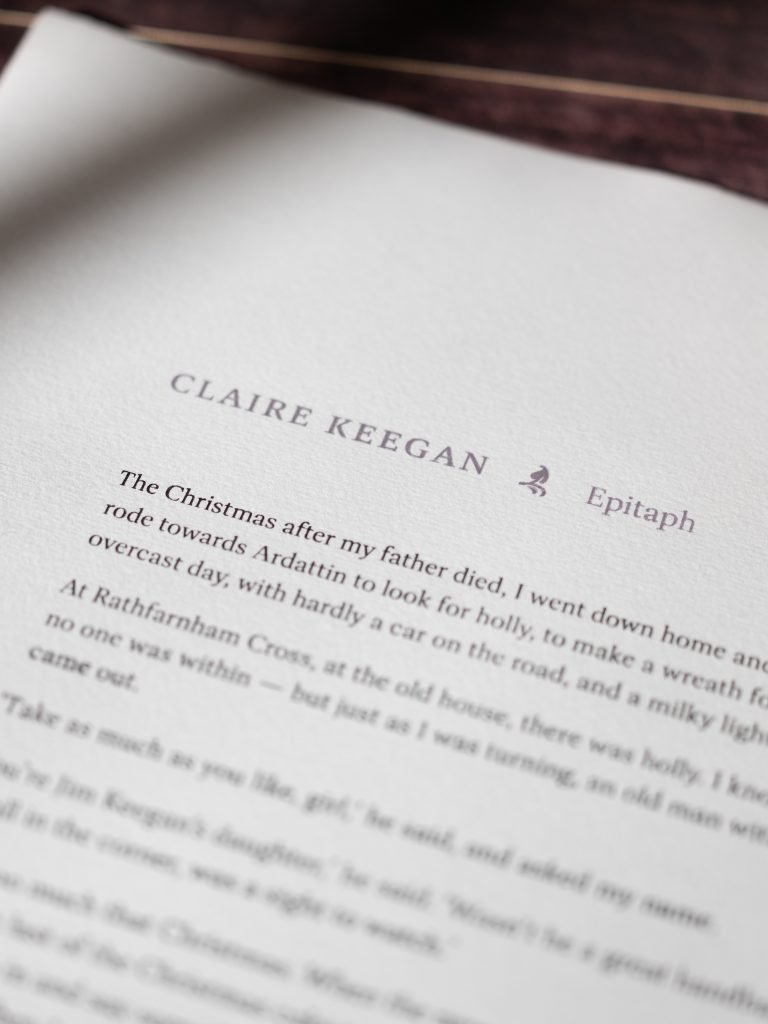 Colm Tóibín ‘Bridge Over the Slaney’
Colm Tóibín meditates upon Thomas Kinsella’s powerful, sensuous poem ‘Another September’ set in Tóibín’s native Wexford. But his piece also offers a vast historical and literary perspective when Tóibín remembers how English poets Spenser and Bryskett, associated with this very place, and who thought ‘the natives here to be barbarians’, would have approved of Kinsella’s well-wrought famous poem.

Anne Enright ‘Killiney Hill’
Landscape is vividly evoked in Anne Enright’s description of a path she walked during the lockdown of 2020 on Killiney Hill. There’s the panoramic view of distant Dún Laoghaire and its pier and in one granite-block paragraph she captures the sounds and scents of the hill path, the absent granite and a memory of her father: geography, history and her story.

Claire Keegan ‘Epitaph’
A complex daughter-father relationship is at the heart of Claire Keegan’s ‘Epitaph’. This very personal piece tells of a winter landscape, ‘a milky light across the beet fields’ and a woman gathering holly for her father’s grave. That kind, gesture is overshadowed by troubled memories but a chance remark brings a strange comfort. And printing that one detail brings a comfort of sorts.

Order your copy of this unique collection 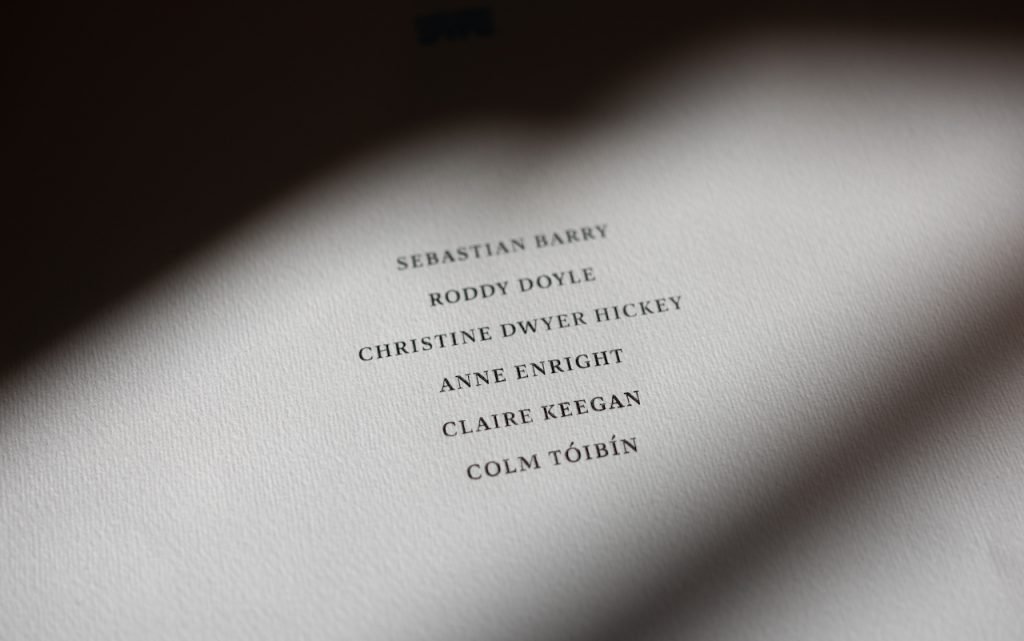 Novelist, playwright, poet, essayist, Sebastian Barry’s work includes A Long Long Way, winner of the Kerry Group Irish Novel of the Year and The Secret Scripture, both shortlisted for the Booker Prize. He won the Costa Book of the Year twice. Appointed an Honorary Fellow of Trinity College in April 2022, Barry was Laureate for Irish Fiction 2019-2021.

Roddy Doyle has written for adults and children and several of his works have been filmed. Doyle won a BAFTA for his adaptation of The Commitments and the Booker Prize for Paddy Clarke Ha Ha Ha in 1993. He was honoured with the Irish Pen Award is a Fellow of the Royal Society of Literature.

Christine Dwyer Hickey, novelist, short story writer and playwright has written eight novels. The Cold Eye of Heaven won the Kerry Group Irish Fiction Award, Tatty was chosen as UNESCO’s Dublin One City One Book in 2020 and, that same year, her most recent novel The Narrow Land won both the Dalkey Literary Award and the Walter Scott Prize.

Colm Tóibín won the Dublin IMPAC Prize for The Master, the Hawthornden Prize for Nora Webster and Tóibín’s prodigious output includes short stories, essay, poetry and novels including his most recent The Magician. Laureate for Irish Fiction 2022-2024, he teaches at Columbia University and is President of Listowel Writers Week.

Anne Enright, novelist, short story writer and essayist, won the Booker Prize for her fourth novel, The Gathering. She also won the Rooney Prize, the Encore Award and the Irish Novel of the Year. Her most recent novel, her seventh, is Actress. Enright was the inaugural Laureate for Irish Fiction 2015-2018.

Claire Keegan is author of two short story collections and two short novels. Antarctica won the Rooney Prize and the William Trevor Prize, Foster the Davy Byrnes Short Story Award judged by Richard Ford and Small Things Like These won the Kerry Group Irish Novel of the Year Award and has recently been shortlisted for the Booker Prize. 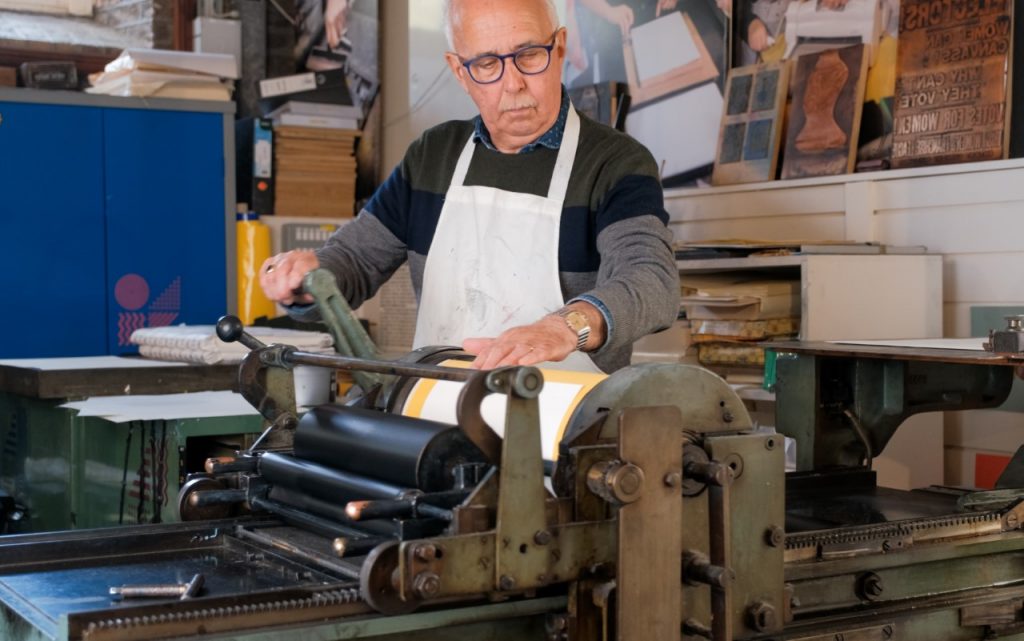 Details from the Colophon

This project was printed letterpress on handmade 145gsm graphic paper from the Ruĝiní Papírna Velké Losiny, a paper mill established in 1596 in Czech Republic. The paper incorporates the Museum’s logo in the watermark.

Printed in a limited edition of 100, with an additional 20 out of commerce. All sheets are signed by the authors and numbered.

Seen through the press by Seán Sills in spring of 2022 on the Museum’s Vandercook No 4.

Printed in a limited edition of 100, with an additional 20 out of commerce.

Printed from magnesium plates and presented in a cloth-covered portfolio.

The cost of the limited-edition portfolio is €895. All profits will be invested into the development of the National Print Museum, a registered charity. Purchase here

An Evening with Claire Keegan

Internationally acclaimed author Claire Keegan will read her contribution to Short Stories in Print and  for the first time and a chapter from Small Things Like These. Keegan will then join teacher and critic, Niall MacMonagle, in conversation. The discussion will be followed by a festive mulled wine and mince pie reception.