Print, Protest & the Polls: Suffrage Opposition and Promotion in Print

At a time when women had no voice in politics, print allowed women to have a voice in the public sphere with which to campaign for change. Irish suffragists produced posters, handbills, booklets, imagery, and written articles which publicised their requests for equal voting rights to men. This helped to counter the prolific negative imagery and messages which opposed and mocked the suffragists and their aims. 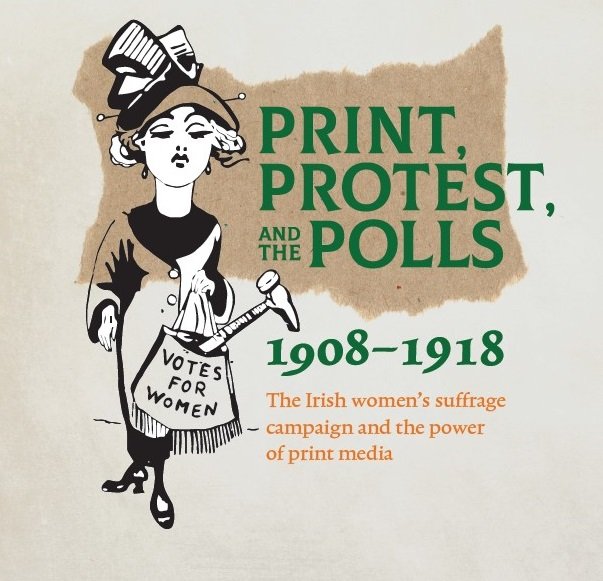 On a wider international scale, women involved in the suffrage movement were publicly represented in largely negative or mocking views. Visual humour played a prominent role in both the suffrage and anti-suffrage imagery. Cartoons could serve to present women’s suffrage in both a sympathetic or critical and lampooning manner, depending on the publication or artist which had produced them. The most commonly produced images showed suffrage campaigners in uncomplimentary depictions. Imagery mainly focused on the “suffragette” – the female campaigners involved in militant political activity, such as window breaking and postbox attacks. These visual representations show the suffragette as a wild, masculine, and dangerous entity – demonstrating the contemporary public fear and anxiety of female political independence.

Irish suffragists used all facets of print media to help promote their demand for equal franchise, as well as to help foster a positive public image of the female campaigners. At a time when women had no voice in politics, print allowed women to have a voice in the public sphere with which to campaign for change. Irish suffragists produced posters, handbills, booklets, imagery, and written articles which publicised their requests for equal voting rights to men.

Using the most prominent and largest mass media form known at the time, they set about spreading their message to as wide an audience as possible through their printed ephemera. Suffragists met the public head on, distributing handbills and information, protesting with posters in the streets, and posting details of their events in public spaces.

The power of printed imagery to mould or change public opinion was well understood by Irish suffragists. They used their own carefully produced images in the form of cartoons and photography to counter their negative visual portrayals. They understood the power of images, and often used clever responses in the same humorous format as their detractors. The participation of a number of women artists in suffrage propaganda offered the opportunity for women to market and publish their artistic skills in a manner which benefitted their political cause. The availability of such suffrage artists provided the Irish movement with a powerful weapon in their promotional arsenal. 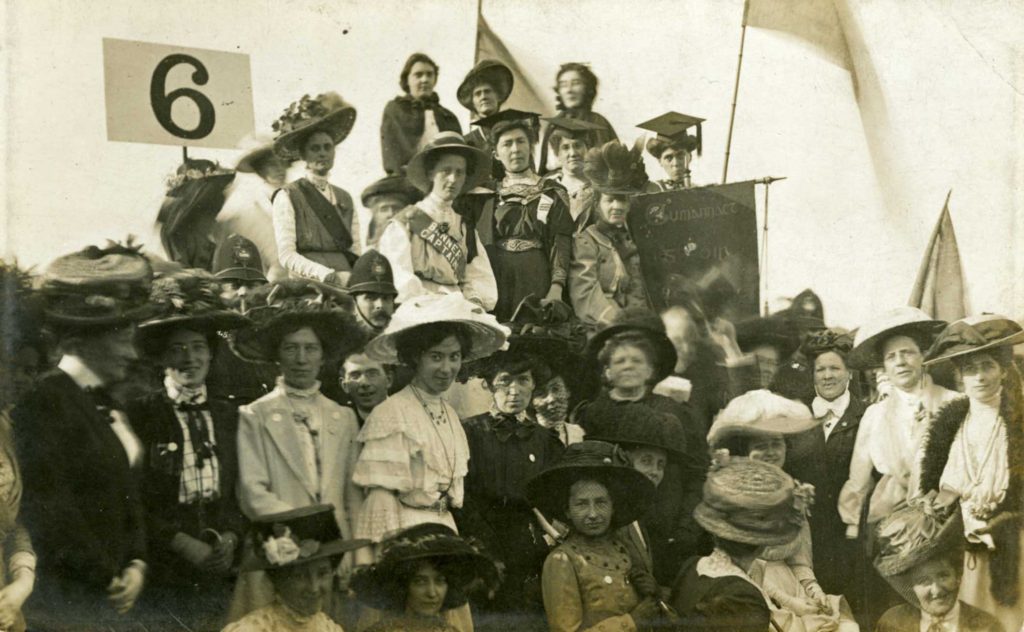 The photograph in this postcard was taken by the famous English female press photographer Christina Broom. It shows a group of suffrage campaigners standing at a speaking platform at a mass suffrage rally in Hyde Park, London, in 1912. At the uppermost head of the platform stands a small group of Irish suffragists. Three of these wear their graduation cap and gowns in order to show their academic achievement and respectability to the watching public.

Two further Irish suffragists can be seen at the top back of the platform, dressed as Irish ‘colleens’ in hooded cloaks to publicly identify their nationality amongst an international crowd. The Irish group display a hand-embroidered banner with the Old Irish text for Irish Women’s Franchise League spelled out in ‘Celtic’ script alongside nationalist emblems. The image shows the Irish suffragists deliberately displaying both their middle-class respectability and their national identity to the international audiences viewing the photograph, showing both a traditional and modern representation of women in contemporary Ireland.

A gentle form of persuasive illustration can be seen in the suffrage cartoons created by the Irish artist Sophia Rosamund Praeger. Praeger had attended both the Belfast Government School of Art and the Slade School of Art, and her work as a sculptor and illustrator was very highly regarded. Praeger designed posters and cards for suffrage groups in Ireland and England, and produced designs for the Suffrage Atelier, an English organisation focusing on a suffrage art collective. One of the Suffrage Atelier designs shows ‘Miss Bull’ advising her father ‘John Bull’ (the personification of England) to drink from a steaming mug labelled “Votes for Women”. Praeger also designed a Christmas card for the Irish Women’s Suffrage Federation. The cartoon on this card shows a man dancing on a board, watched by a woman and child. Praeger’s images, as well as her captions, are much gentler and less direct than the anti-suffrage cartoons in the popular press.

Pro-suffrage cartoons by Grace Gifford, circa 1912

Certain Irish suffrage cartoons turned the tables on those who mocked the suffragists. Two cartoons by the artist Grace Gifford (née Plunkett), a supporter of suffrage and of the IWFL, are titled “Should men have the vote?”. The cartoons show an unhappy male gambler turning out his pockets to show that he has lost his money, and a drunk and dishevelled middle-class man being steadied by a policeman.

Gifford had attended the Dublin Metropolitan School of Art and the Slade School of Art in London, and worked as an artist producing political and cultural cartoons and caricatures. She would later be better known for her involvement in the Irish republican movement, and her marriage to 1916 leader Joseph Mary Plunkett.

This protest poster was produced by the Irish Women’s Franchise League (IWFL). Irish suffragists used many means of print media to spread information on their events and their message. Posters were used in public “poster parades”, where they were held by suffragists as they paraded their message through the streets.

This replica of a surviving small brown paper bag produced by the IWFL shows one example of the contemporary personal branding in use by an Irish suffrage organisation. A bag of this size may have been used to package postcards, badges or other small goods which may have been sold at the organisation’s headquarters in Dublin city.

← Print, Protest & the Polls: Suffrage and the Picture Postcard