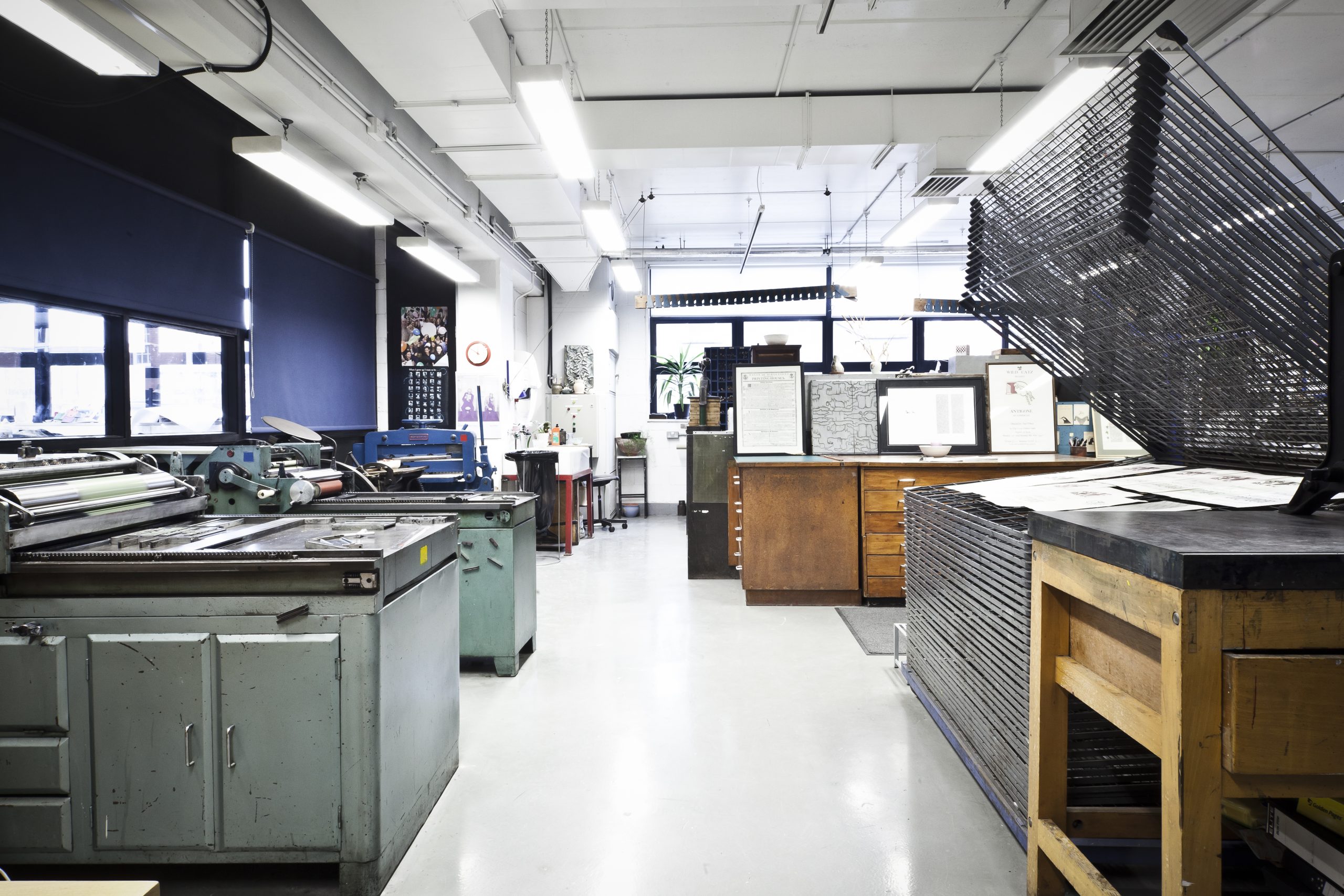 Distillers Press, previously known as the graphic print workshop, had its origin at the National College of Art and Design’s original location on Kildare Street. In the 1980s when the Department of Visual Communication moved to the college’s new location on Thomas Street, the facility was expanded by the then Head of Department, Bill Bolger. Seán Sills was appointed custodian of the Press in 1983.

The Press now has a number of operational letterpress proofing presses and a large collection of metal and wooden type approximately 280 cases of metal type and 110 cases of wooden type in a wide variety of fonts.

It is used by students on a daily basis for creative projects and also as a teaching tool to introduce the fundamentals of typography. Ireland’s first practice-based Masters in the visual arts was undertaken at the Press in 1986; samples of this work can be viewed in the exhibition.

The Press is unique in being the only operational letterpress print facility used on a daily basis in third level design education in Ireland. Over the years Distillers Press has collaborated with some of Ireland’s greatest artists, writers and poets including the late Nobel Laurette Seamus Heaney.

The facility began to be known as the Distillers Press in the late 1990s due to the college campus location in the old Power’s Whiskey Distillery, where whiskey was manufactured for nearly 200 years. In 2005, Distillers Press relocated to the School of Design and reverted back to a purely letterpress facility due to the resurgence of the interest in letterpress printing and the advancements in digital printing.

Distillers Press collaborated with the National Gallery of Ireland on its first contemporary exhibition of Print Art into Art, and the Chester Beatty Library for their exhibition The Holy Show. Work from the Press is collected by private collectors and national institutions such as the Rare Books Section of Trinity College Library, National Library of Ireland and the National Visual Arts Library, as well as many overseas libraries and universities in the UK, USA and Australia.

Graphic Explorations is a showcase of work produced by graphic design students at Distillers Press from 1983 until present day. Curated by Seán Sills, custodian of the Press during that period, the exhibition encompasses posters, books and a collection of ephemera. The National Print Museum has had strong links with Distillers Press over many years, working on collaborative projects and is delighted to host this exhibition. Graphic Explorations has been made possible with the generous support of Irish Design 2015.

See the What’s on page for further programming details.