This exhibition examines the Irish-printed album cover. Included album covers were all designed or printed in Ireland. The work was completed for Irish groups, who worked at home or abroad, as well as albums from abroad referencing Ireland or Irishness. The collection dates from the late 1950s to the present day, and covers a wide range of musical and non-musical genres.

The overview page for this comprehensive online version of the Green Sleeves exhibition is here.

This exhibition examines the Irish-printed album cover. Included album covers were all designed or printed in Ireland. The work was completed for Irish groups, who worked at home or abroad, as well as albums from abroad referencing Ireland or Irishness. The collection dates from the late 1950s to the present day, and covers a wide range of musical and non-musical genres.

Yet even with the decline in production and sales, the vinyl record and the album cover have both persisted, and have seen a revival of late. Despite selling in much smaller numbers than its heyday, the format has proven remarkably resilient and album covers continue to be designed in Ireland. 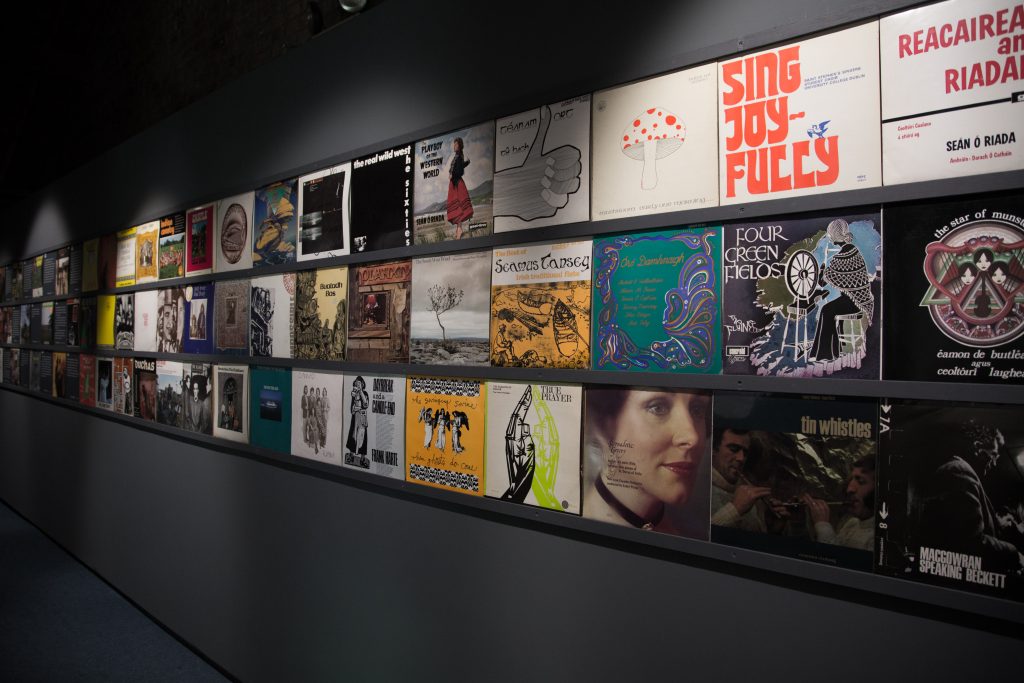 For most of the 20th century the gramophone record, pressed originally in shellac, later in vinyl, was the dominant recorded musical format. The 78 rpm (revolutions per minute) record, usually pressed in shellac, could only allow for five minutes per side. Shellac is a brittle and noisy material and these limitations saw numerous attempts to produce a more robust alternative.

In the late 1940s the vinyl LP (long play) record was introduced by Columbia Records, available in either 10 or 12 inch formats played at 33 rpm. The 10 inch record allowed for 35 minutes of sound, whereas the 12 inch for up to 45 minutes. Unsurprisingly as time progressed the 10 inch was superseded by its larger rival. Given the constraints on the vinyl record, various means were employed to allow for longer performances prior to the arrival of the CD (compact disc).

In tandem with the LP, the 45 rpm 7 inch single appeared, produced by RCA Victor. This smaller format at first contained about three minutes of music. Later this was extended by new production and microgroove recording techniques. Several other formats were used including 12 inch singles and 7 inch EPs (extended player) records. 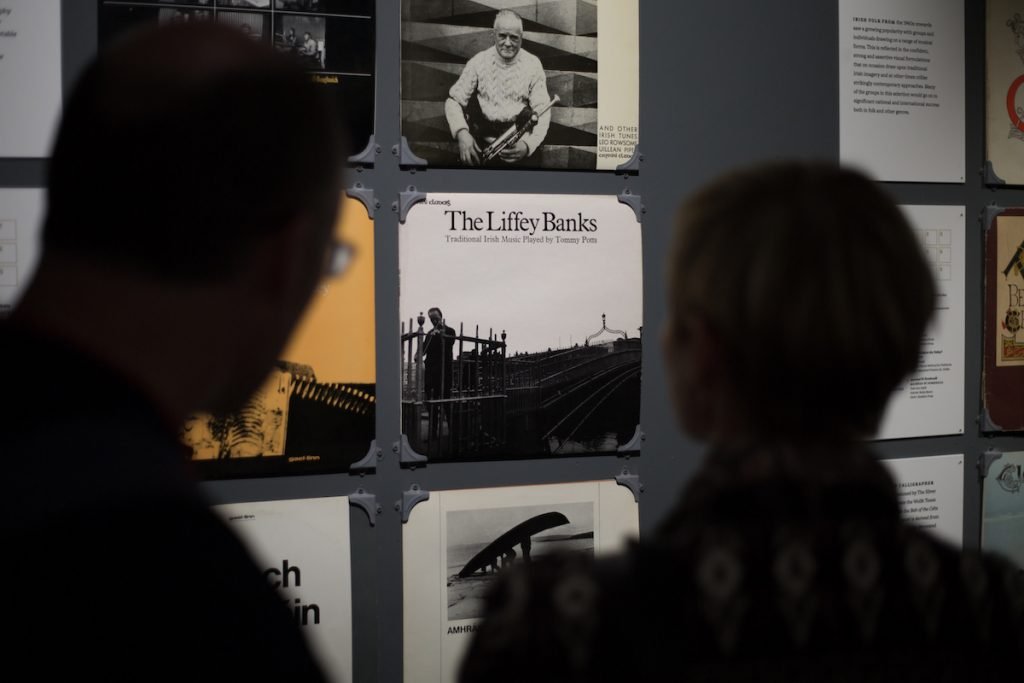 The album cover developed first as a means of protecting and promoting the various record formats, whether 7 inch single, EP or LP record. As the nature of albums changed so too did the album covers. For example, the compilation album, an album of songs not intended to be a single work, arrived in the 1950s.  The concept album, a collection of albums expressing a theme or idea, appeared afterwards in the late 1960s.

Records inside album covers were usually held within sleeves – originally these were generic paper or plastic covers used to avoid scratches. By the 1970s however they evolved to specially designed printed sleeves, which would contain additional information and song lyrics.

Each iteration brought with it different requirements as well as cover sizes. As time progressed the demands of musicians and record labels saw considerable experimentation in the form of the cover itself. For example, gatefold was employed – an oversized cover folded to the record’s standard size, along with other innovations. This gave more area to experiment with artwork and text. The cover became a piece of art and design in its own right.

By the 1960s there were over 150 printers in Dublin alone, supported by a workforce of thousands. Apart from these, a smaller number of companies were involved in printing record sleeves, both of Irish and international musicians. Most of these companies were based in Dublin or on the Irish eastern seaboard.

The market for record sleeves started to grow. The packaging company Dakota Ltd. purchased the smaller Earlsfort Press in the 1960s to concentrate mainly on producing record sleeves for the Irish music industry.

The 1980s however brought about change. In the printing industry, multinational computing corporations based in Ireland contracted local companies to produce their computer manuals. So great was the demand that large parts of the printing industry were occupied with the supply of manuals. This lead to a reduced capacity in Ireland for record sleeves printing, at a time when the record format itself was under threat from another direction.

By the mid 1980s sales of tape cassettes rivaled those of vinyl records. Then a newer format, the CD (compact disc), arrived towards the end of the 1980s, marking another shift. The demand for vinyl records and album covers declined swiftly. Since then almost all album covers for Irish groups have been printed outside of Ireland.

← The Fall, Rise & Return of Vinyl

In Their Own Words: Printers and Designers →